Oh, gumdrops!  I ain’t been writin’ here much.  I’ve been havin’ too much fun with Pip an’ Amalynn!  Right quick, while they’re still sleepin’, I figured I’d take a sec to pop in an’ write a li’l bit.

First major thing was figurin’ out where we was gonna sleep.  Cuz Pip’s small, her house is small.  An’ maybe just me woulda been ok, or just her sister Amalynn, but alla sudden she got two big dolls tryin’ move inna her house, an’ we complicated stuff a bit.  Now, I’m right good at thinkin’ small thoughts, cuz lotsa my friends are small dollies, but seems I ain’t so good at bein’ small… 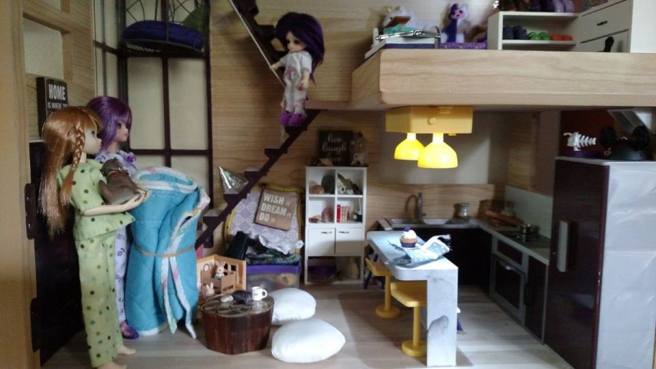 There’s loads of stuff to look at.  I wanted to go see Pip’s room too, so I hopped upstairs an…wow…!  She hadda unicorn, an’ a dollie, an’ a minion, an’ a vase, an’ alla neat signs, an’…  Wow!  But more’n’anything, I realized I’m an awful big doll.

She also showed me she gots a li’l bed under her bed.  She called it a trundle?  It looked so comfy!  Pip said she thought maybe I was too big, but I said nah, for sure I could fit in it.  An’ yea, I squished on…  See?  I ain’t so bad at thinkin’ small thoughts.

Inna middle night, though, I guess my brain shut off, an’ it ain’t remembered I outta be thinkin’ small thoughts, cuz I turned inna giant inna tiny house 😦 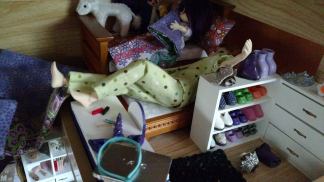 Yeah.  I sleep-stretched.  Knocked a buncha stuff down onna Amalynn.  Felt super bad!  An’ Pip even hadda wake me up, cuz I was snorin’ like some bear.  Gumdrops!  I cleaned alla stuff up, the books an’ telephone an’ papers an’ crayons, then I crawled inna downstairs sleepin’ bag with Amalynn.  Seemed loads safer there.  An’ Riley gotta curl up on m’ feet, so it was good.  Pip’s gotta really sweet trundle, tho!

One day, we went explorin’ inna Pip’s garden.  Oh, gumdrops!  I wanna take Cooper there.  He’d love lookin’ at alla she flowers an’ plants an’ diggin’ inna dirt!  There were these things that looked all pre-hysterical.  Pip said they was just ferns (baby ferns, maybe?), but I ain’t never seen no fern like it afore!!

An’ she had alla different plants, like foxglove (super big foxglove!) an’ japanese maple trees an’ azaleas an’ plants I ain’t able remember.

But I was all pointy an’ “ooh, look!” an’ “whassat??”  But they didn’ wanna go climb the Japanese maple trees (see ’em back there?  all red an’ pretty an’ beggin’ to be climbed!), so we took pictures with alla different flowers. 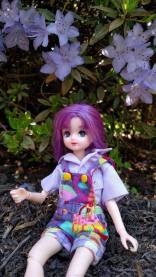 We spent a day bein’ art dollies, too!

We hadda playtime day.  Pip an’ Amalynn built somethin’ with Legos, an’ Hittys an’ me went bowlin’!

Pip said Legos was fun.  There was lotsa instructions, tho, an lotsa li’l parts.  I dunno if I wanna try makin somethin’ that’s got so many li’l bits an’ alla instructions.  Maybe if I’m just puttin’ somethin’ together how I like?  That’d be fun.  Cooper said Dolli Lane got some Legos earlier, an’ Meikiko an’ Sparrow gotta play with ’em some.  They had fun.  So it’s gotta be pretty neat.  But I liked bowlin’!

Pip an’ Amalynn worked a bit at readin’ instructions an’ buildin’ stuff.

An’ inna end, they made somethin’ super cool!

So maybe alla instructions are worth readin’.  Maybe I could get Cooper to help too if I getta Lego set, instead of makin’ somethin’ outta what’s inna mind.

An’ Hittys an’ me had loads of fun, bowlin’.  There was alla these pins, an’ a couple balls we gotta roll, an’ a thing you gotta aim at alla pins.  You’re ‘sposed to knock alla pins down by hittin’ em with the ball when it rolls down the alley.   It was kinda tricky to aim.

An’ harder still to guess what aimin’ would work, an’ what aimin’ might just wind up rollin’ down those gutter lines.  I did a lotta that.  Gutterballs, alla Hittys called it.

I got pretty ok at it inna end, tho, an’ alla we figgered out how to hit the pins an’ knock ’em down.  If you knock ’em all down, it’s called a strike!  I wasn’t that good, but it was awful fun to knock some of ’em down.

We had some bad bad news at first.  Aunty Glenda’s puppy, Leo-dog, got awful sick.  An’ now he can’t play with us anymore.  He hadda go sleep?  But she says he can play ‘cross a Rainbow bridge with other pups.  We’re gonna miss him.  Aunty Glenda was awful sad, an’ I was awful sad with her.

She has another puppy, Haley-dog, who could still play with us.  Well…not with us.  We’d get all sortsa drooly, an maybe I loves puppies, but I don’ really wanna take a bath in puppy drool.  But Haley’s a right warrior dog!  Aunty Glenda’s yard hadda mole that kept diggin’ inna dirt, an’ Haley went after it to make it go away.  I offered to get m’ sword an’ help, but Haley was so good, she didn’ need my help at all.  She got the mole to leave the yard all on she own!! She could be a monster hunter too.

Riley’s been a good pup so far.  I’m glad for that.  I was worried she’d make messes an’ be bad an’ stuff, but she’s been good.  I take her out when she’s gotta go, an’ use some of Aunty Glenda’s puppy food when she’s hungry, an’ it all works ok.

Kestrel, since you’re away, I thought I might try my hand at recording things of interest that we’re doing around the house.  This one involved something I think you too would like a great deal: Legos.

I had never heard of these before.  They are small plastic bricks used to build, construct, and create.  They are truly amazing.  Sparrow said there was a basket of them at the side door this morning with a note from Vega, saying that the government sent some to Dolli Lane and that Nim wanted to share them with us because the Littles enjoyed them so.  (no, she did not send everything they have, so thankfully they are still entertained)

The bricks stack on top of each other and latch together fairly tightly.  It’s akin to building with blocks, but the blocks don’t tumble apart if you touch them the wrong way.  At first, I had to stop and look at them, considering what to do with them. 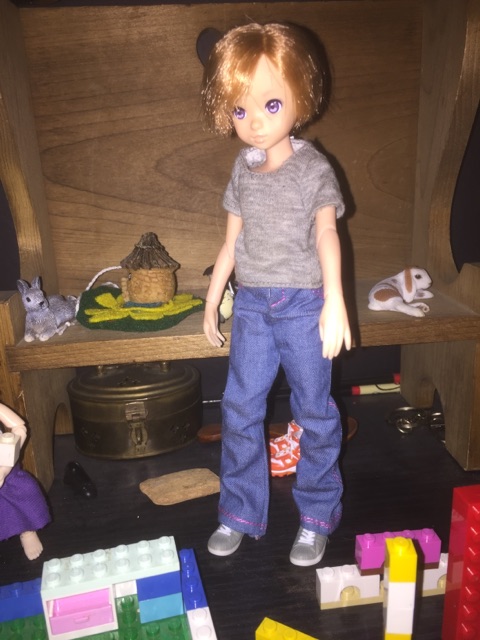 But then Meikiko came over with a brick and suggested that we build a house.

There was a doll made of the same material, and Meikiko has her Totoro figure, so making a house was logical a idea.  So we each picked up some different pieces and started building it up. 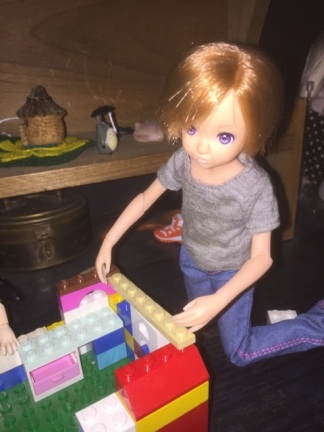 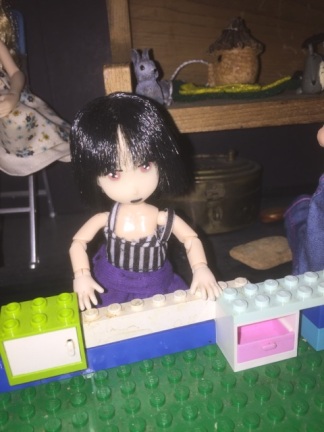 Sparrow was less invested in the construction phase.  She was fascinated by the doll figure.  (I did not mention to her that it had a face on the back of its head as well.  I was concerned that might be upsetting.  I don’t think she has noticed yet.  I would rather not  be the one to bring it to her attention.) 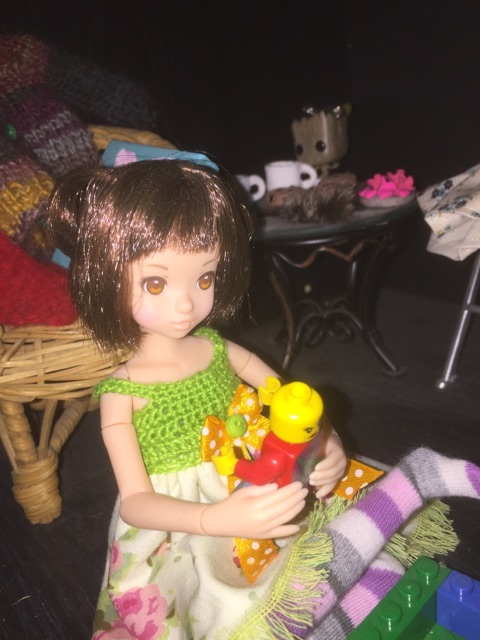 I was still busy working over the finer points of the house when Meikiko decided that no, we were most definitely done, and it was time to play.  Sparrow had set the Lego figure in the house area, and that was enough invitation for the both of them. 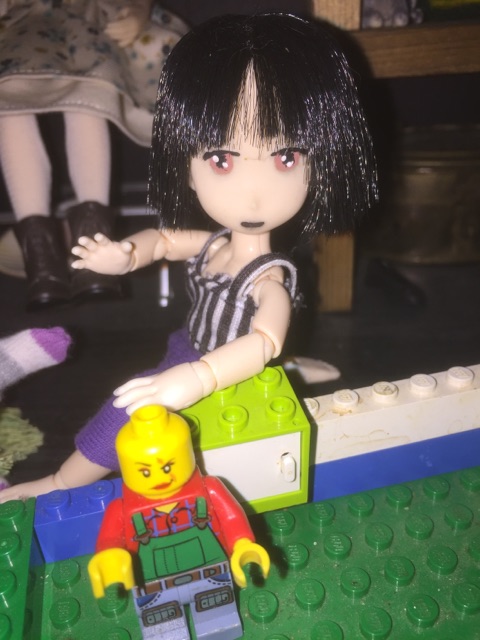 I watched while Meikiko and Sparrow worked with the figures, moving them in and out of the house area.  I wish we had more bricks, though: the walls were fairly short, and I could see definite possibilities for making Lego-based furniture for the dolls.  Perhaps another time. 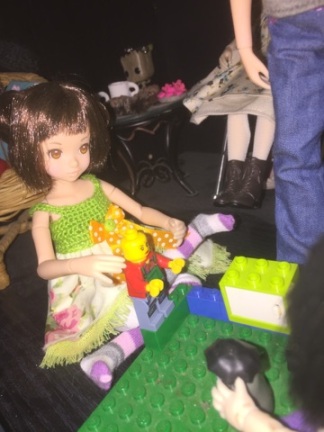 These toys seem like something you would greatly enjoy, Kestrel.  We’ll probably return these bricks to Dolli Lane, but I’m sure Nim would loan us some more when you get back from Washington State (or we can go over there and play with the Littles).  In the meantime, I hope you and Pip are having a good time!  We do miss you and Riley around here, but I know we’ll see you again soon.  Please say hello to Pip and Amalynn and Auntie Glenda for us.