Lark caught me again. She wanted to teach me more grammar lessons. I like Lark, I do! But grammar’n’me… well, we ain’t best friends. 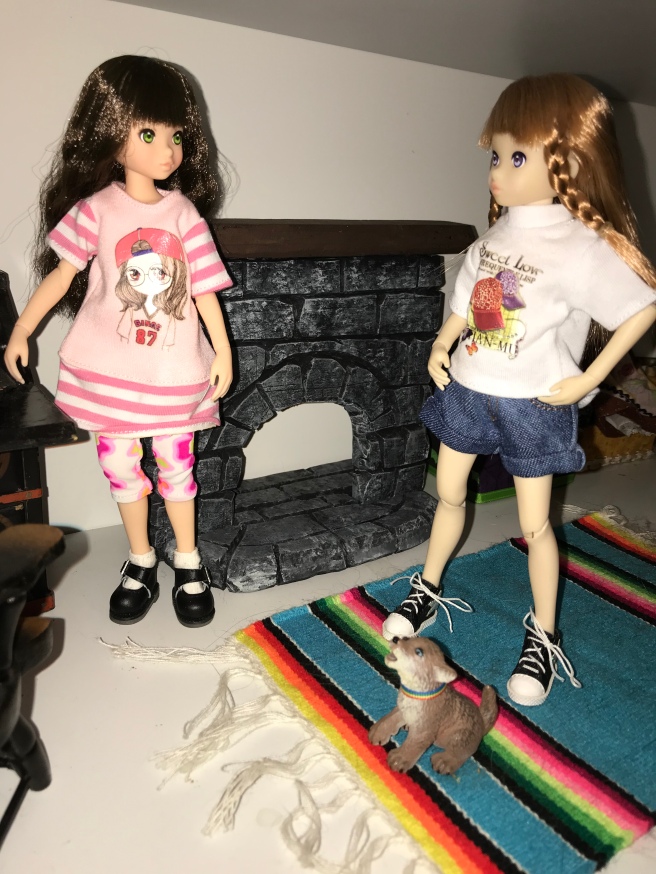 Riley was there. She tried to help. But there’s only so much a pup can do inna face of grammar. I told her I forgave her. She wouldn’t leave.

“Come, Kestrel.  Sit down.  We’re going to do something fun today.  Remember I said we’re going to write poems?”

Umm…poems are fun?  I looked at Riley.  She whined a li’l at me.  I wanted to be out, playin’ inna field.  But I took a deep breath.  I could poem.

Some poems are really short, an’ some are really long.  She started speakin’ words outta the blue that didn’t make much sense.  Then I realized they were a poem she was givin’ as an example.  She started with a short one first.

An old silent pond…
A frog jumps into the pond,
splash! Silence again.

It made me giggle.  I like frogs.  They’re cute an’ green.  I didn’t know you could write poems about frogs.  I thought they hadda be super long an’ serious an’ all emotional.  Wren would be good at poems.  But frog poem was written by a super famous, really old dude named Basho.  So maybe poems don’t gotta be mushy-squishy an’ stuff.

Then she gave one a bit longer, but not super long.

I have eaten
the plums
that were in
the icebox
and which
you were probably
saving
for breakfast
Forgive me
they were delicious
so sweet
and so cold
Hmm.  I liked that one too.  Maybe I could do this poem thing!  Lark sharin’ poetry seemed like it might be a good idea!

But then Lark started sayin’ one that didn’t make no sense to me.  I guess it hadda lotta emotions an’ descriptions an’ things, but there was just too much.  I’ll share it, cuz I know I outta, so everybody else gets a good idea bout what poems really are, but I gotta say I dunno what it means.
I told her I didn’t know if I could do it after she said that one.  She suggested I outta stay with writin’ shorter poems at first.  She said what she shared with me were written by people that were good poets, ones you could find in books an’ all.  I shouldn’t worry bout tryin’ to write like them.  I outta write like myself, using things I saw an’ felt an’ though.  Then she went off to help the Hittys with cleanin’ an’ organizin’ cupboards.  I got left with a pencil an’ some paper.

It was tough.  I stared at the fireplace.  I stared at the bricks.  I stared at the cracks inna ceiling.  I thought bout fightin’ an’ monsters an’ swords an’ traps.  (I wanna try settin’ more traps for monsters, to lure them inna places where it’s gonna be easier to fight ’em instead of always fightin’ inna places where they’re comfortable.)
But that was gettin’ me sidetracked.  I hadda think poems.  Monsters didn’t make good poems.  I didn’t think they would.  Shiny wires an’ sharp swords.  An’…umm….
Nope.  I was stuck again.  This poeming thing was tough!

Then I remembered Lark sayin’ somethin’ bout how I outta write what I know.  So I sat up again, thinkin’ bout what I know.  Riley was onna desk, so I played with her some, pettin’ her soft fur an’ givin’ her puppy kisses.  I didn’t wanna play too hard, cuz she’d get noisy, an’ for sure Lark would realize I wasn’t really poeming.  Then, alla sudden, somethin’ kinda popped inna my head.  I wrote it down quick, so it wouldn’t get away again.

Li’l bit after, Lark came back downstairs.  She said she’d written a short poem called a haiku, an’ asked if I wanna hear it.  I did.  I was hopin’ she wouldn’t think too hard bout why Riley was sittin’ onna desk.

She coughed a tiny bit, then said:

Wow!  That was nice an’ pretty.  It was like I was standin’ inna field, lookin’ at the trees.   Lark’s good at poeming!  I wasn’t so sure bout what I’d written, but I hadda share it.  At least she didn’t ask me to read it out loud.  She took the paper instead an’ read it quiet to herself.

When she was done, she just kinda stopped an’ looked at me.  Then she looked at Riley.  I was playin’ with my puppy again.

Then she laughed an’ said I did good.  She liked that it rhymed.  An’ that was it for our grammar lesson.  She did add that she was gonna hafta re-think how our lessons were goin’, cuz she wasn’t sure her teachin’ was havin’ the effect she wanna make.  I feel a li’l bad about that, cuz it sorta means I’m not a good student, but that’s ok.  Cooper says we all got subjects we like better’n’ others.  An’ it’s ok, so long as we try our best with things that are new.

Riley an’ me went out inna sun-soaked fields an’ ran around, chasin’ butterflies an’ playin’ in mud puddles til we were so hot, we hadda flop down in some shade an’ watch clouds floatin’ by.

Riley is small and sweet,
A perfect little ball of fun.
But Riley is not good to eat.
Riley is not a plum.

Hope maybe everybody else can try writin’ some poems too.  They’re kinda fun.  Sorta.